Latest Tweet
I’d like to see the Venn diagram of people who watch both Battlebots and the Westminster Dog Show. Am I one of the… https://t.co/PIcRQ7NTRd
@marklippert


Current Read
Yes, I Can Say That: When They Come for the Comedians, We Are All in Trouble
Judy Gold 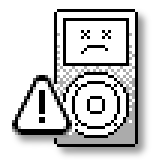 Well, the poor li'l iPod's time has come. After a year of hard drive problems, it finally gave up for good. Not a bad run, considering how much I used the bugger. Plus, despite all the bad press Apple has gotten over battery life, iHop was still chugging along for about eight hours on one charge up to the end.

It's a shame I have to put it to rest, but I've been wanting a larger one for a while now. I'm happy it died doing what it loved best instead of wasting away in a drawer somewhere. A hero's death. Guess I'm off to the Apple store.